From Dundee to Punta Arenas

After months of anticipation it’s finally time for me to head off on my elective (a self organised placement during your medical degree which is usually, although not necessarily, carried out abroad) – 6 weeks at the King Edward Memorial Hospital in the Falklands, with a short trip to Chile on either side. I suspect that I’ve been pretty insufferable for the last few weeks as the time to depart has come closer and closer.

My flight itinerary out to the Chile was not simple, with stops in London, Sao Paulo and Santiago before finally arriving at Punta Arenas in the southern most part of Chile – Magellanes y Antarctica. The whole journey took 36 hours door-to-door and I was very grateful for Mum and Dad coming up to Scotland to drop me off at the airport, saving me the additional hassle of a train journey at the start.

I had an almost 6 hour wait at Heathrow, which was tedious in the extreme but gave me plenty of time to collect my bag and recheck it in before settling myself in Carluccio’s with an assignment that I still needed to finish and some delicious focaccia. Having dreaded the flight to Sao Paulo, which at 12 hours was the longest leg and overnight, I was lucky to find myself on a fairly empty flight with a whole row of seats to spread out in. The food was surprisingly good (well, in all honesty I can only really remember the salted caramel chocolate ganache, which was amazing!), the cabin crew were cheery and despite having to bend myself around the armrests which couldn’t be raised all the way up, I managed to get some sleep and arrive in Sao Paulo feeling relatively human. 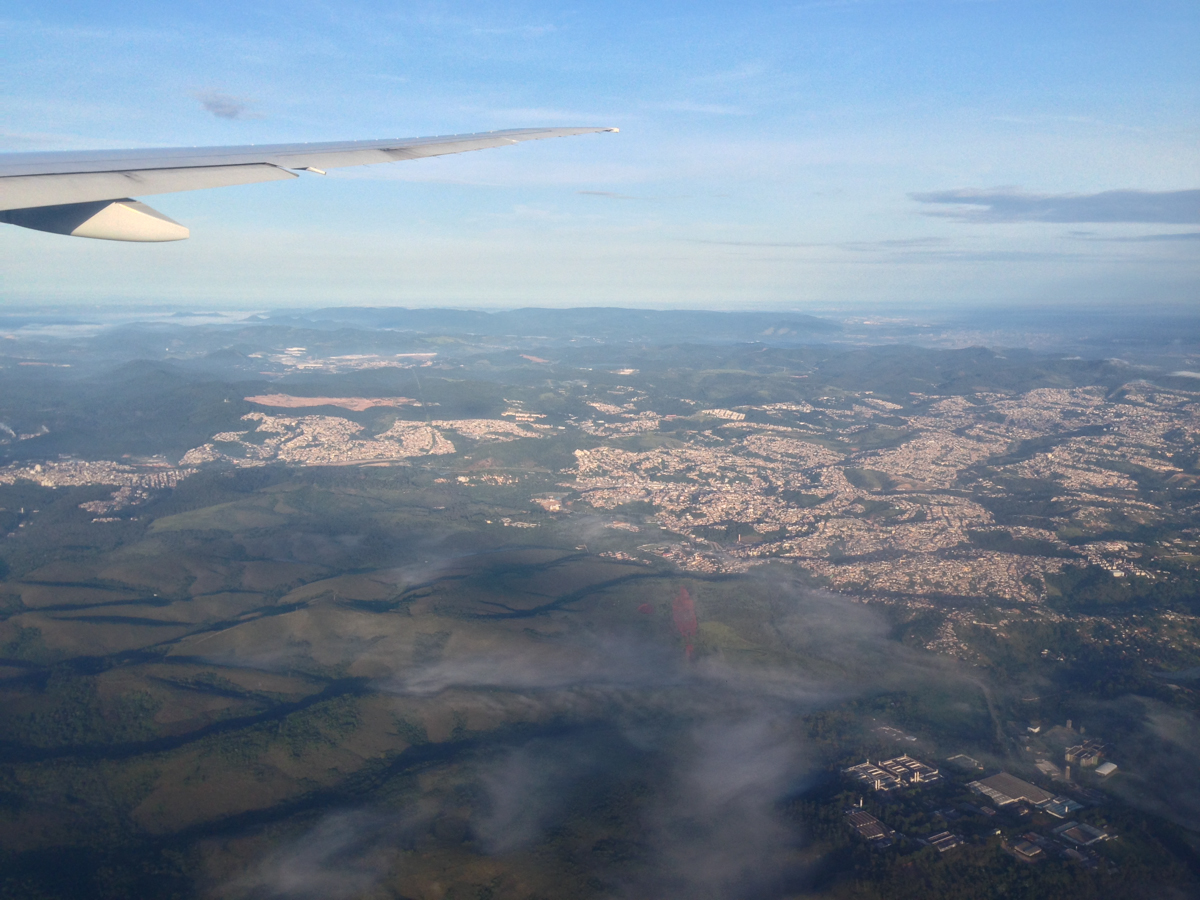 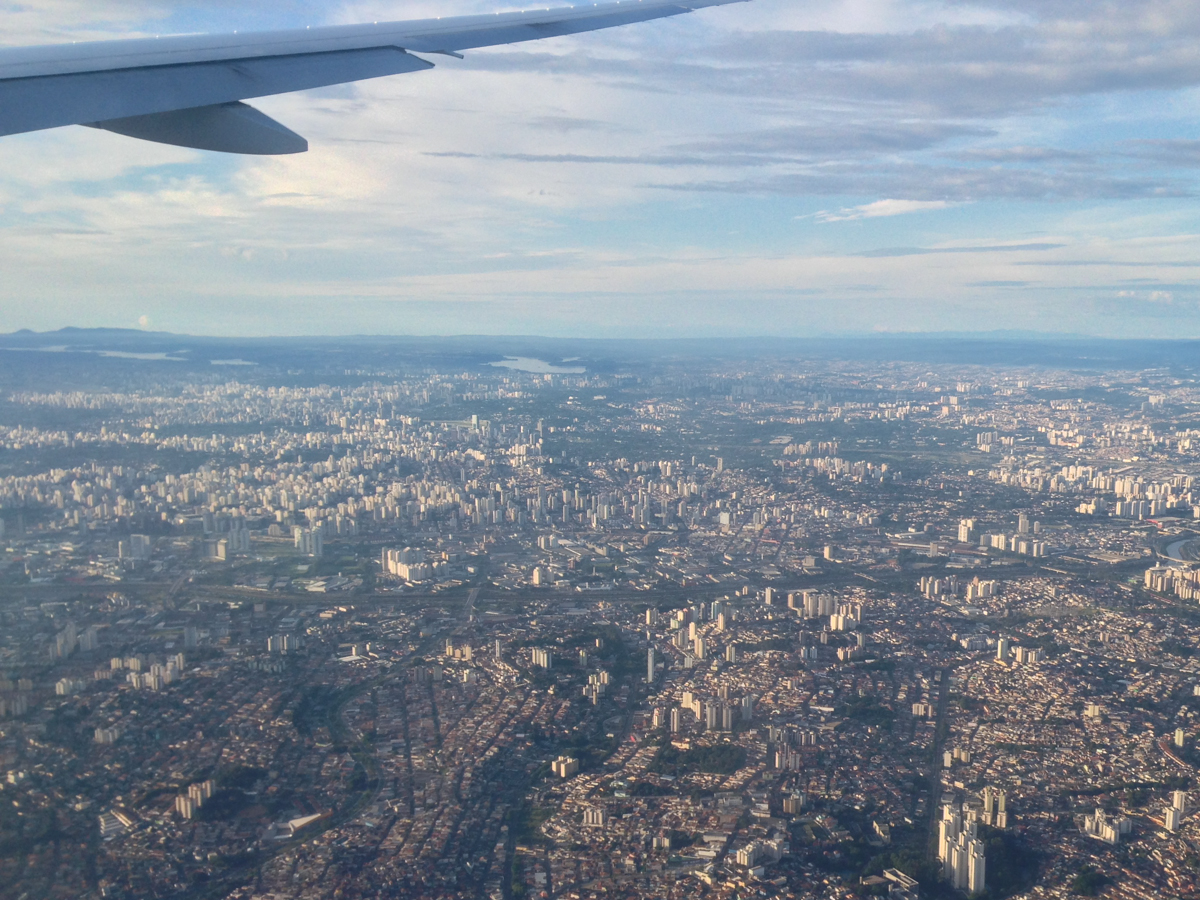 My transfer time in Sao Paulo was only scheduled for 1:45 but having been delayed leaving Heathrow we only had an hour – just enough time to clear security and sadly relinquish the extra bottle of red wine they’d given me on the plane. I was not, therefore, particularly optimistic about the chances of my suitcase joining me on the next leg to Santiago. 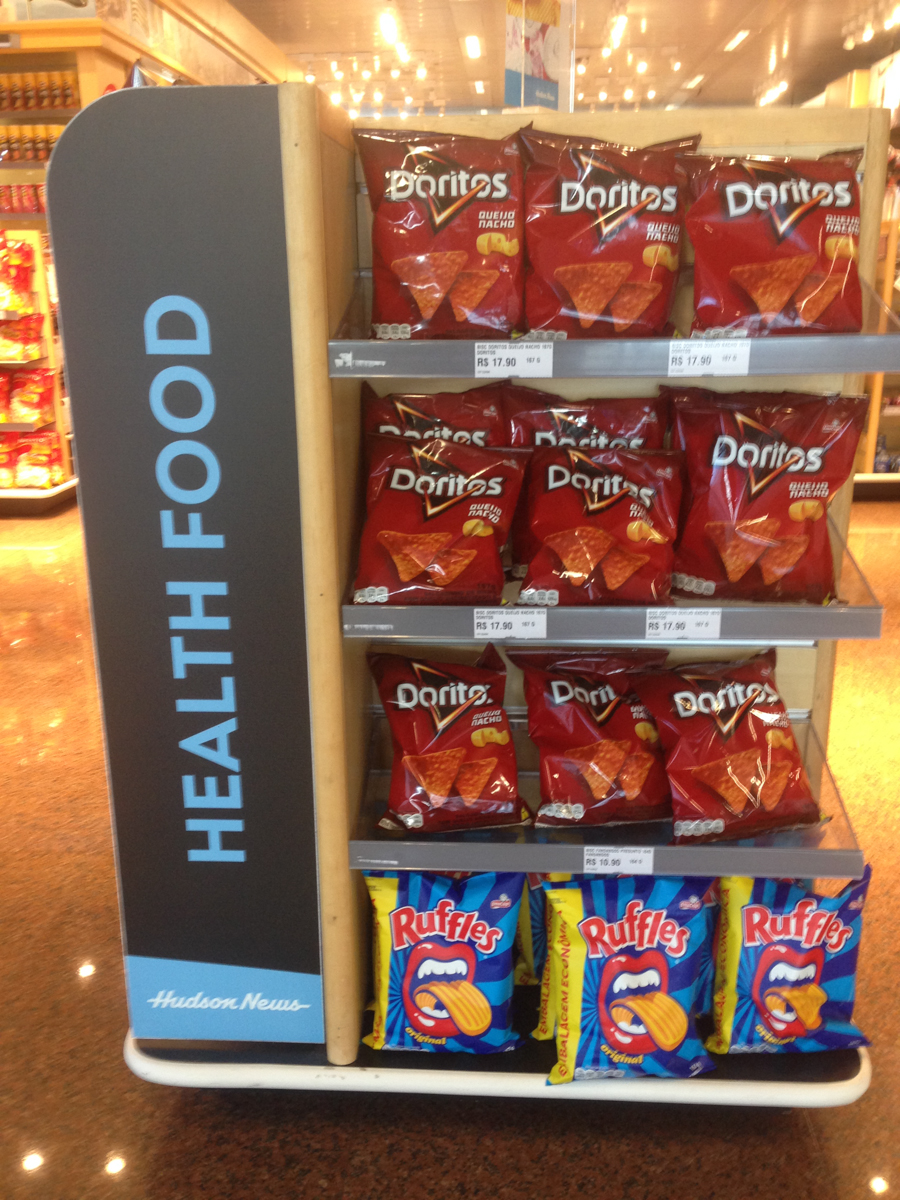 Amused by the healthy eating options in Sao Paulo!

Another window seat, and yet again a row of seats to myself. It’s not often you get that lucky on a long journey! I really enjoyed this leg of the trip as the views were fantastic, particularly as we flew over the Andes. The colours of the rock were beautiful and I was amazed at how different it was to the other mountain ranges I know, such as the Rockies and my lovely Scottish mountains. 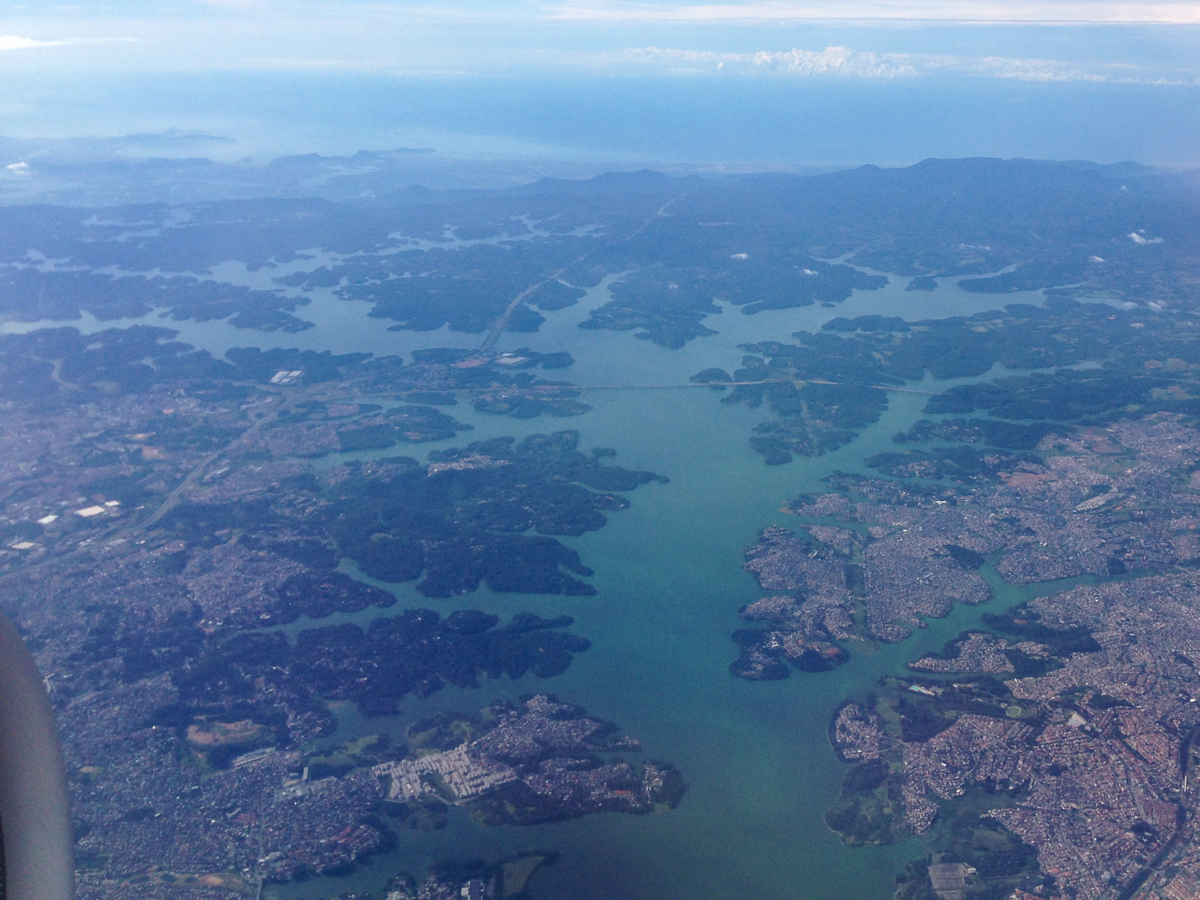 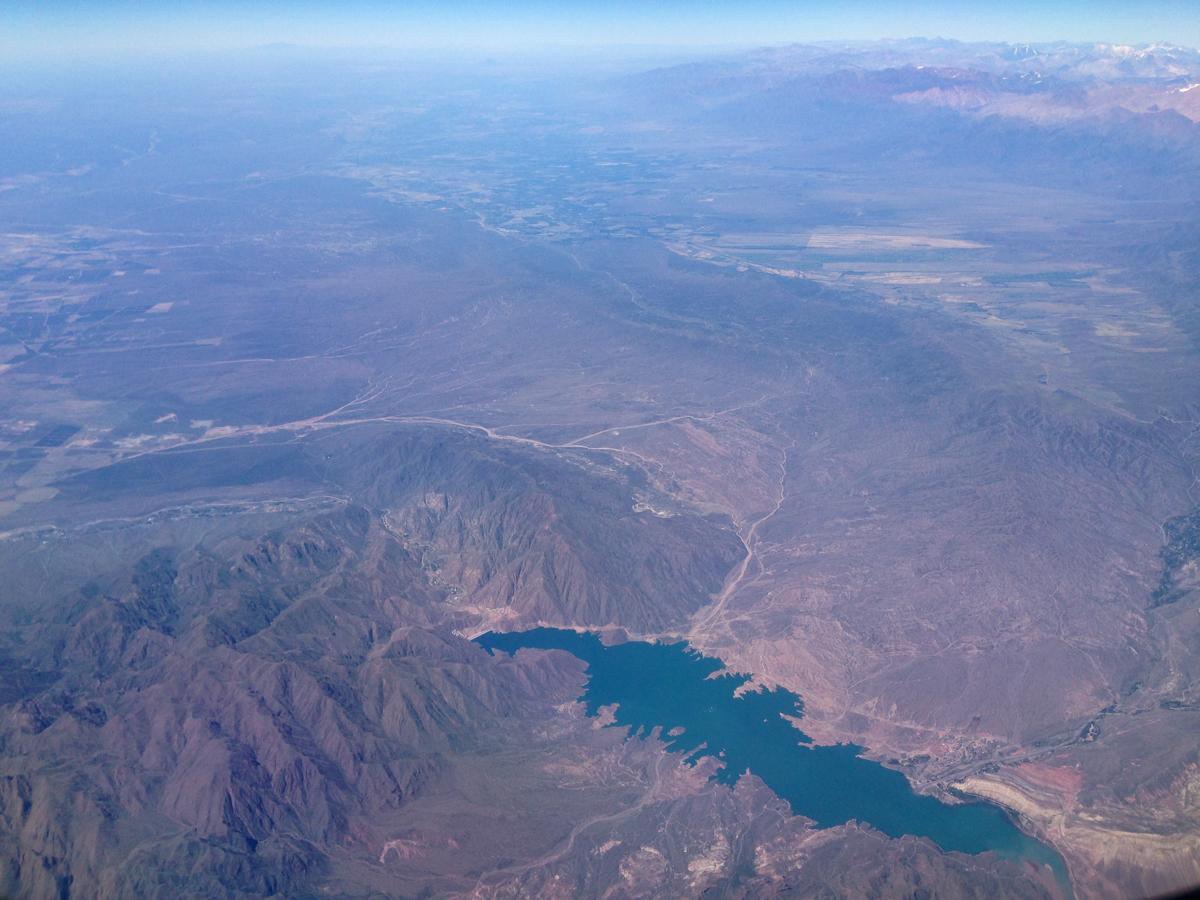 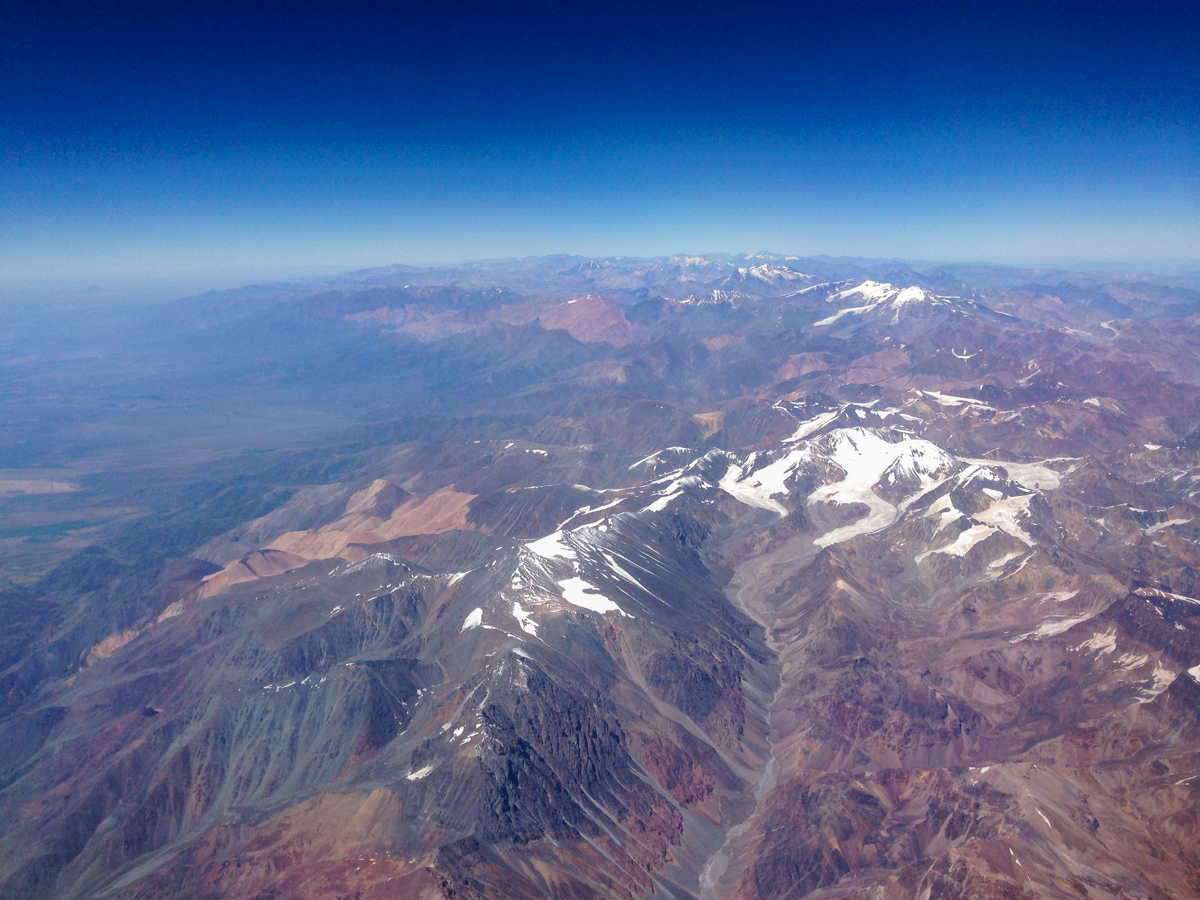 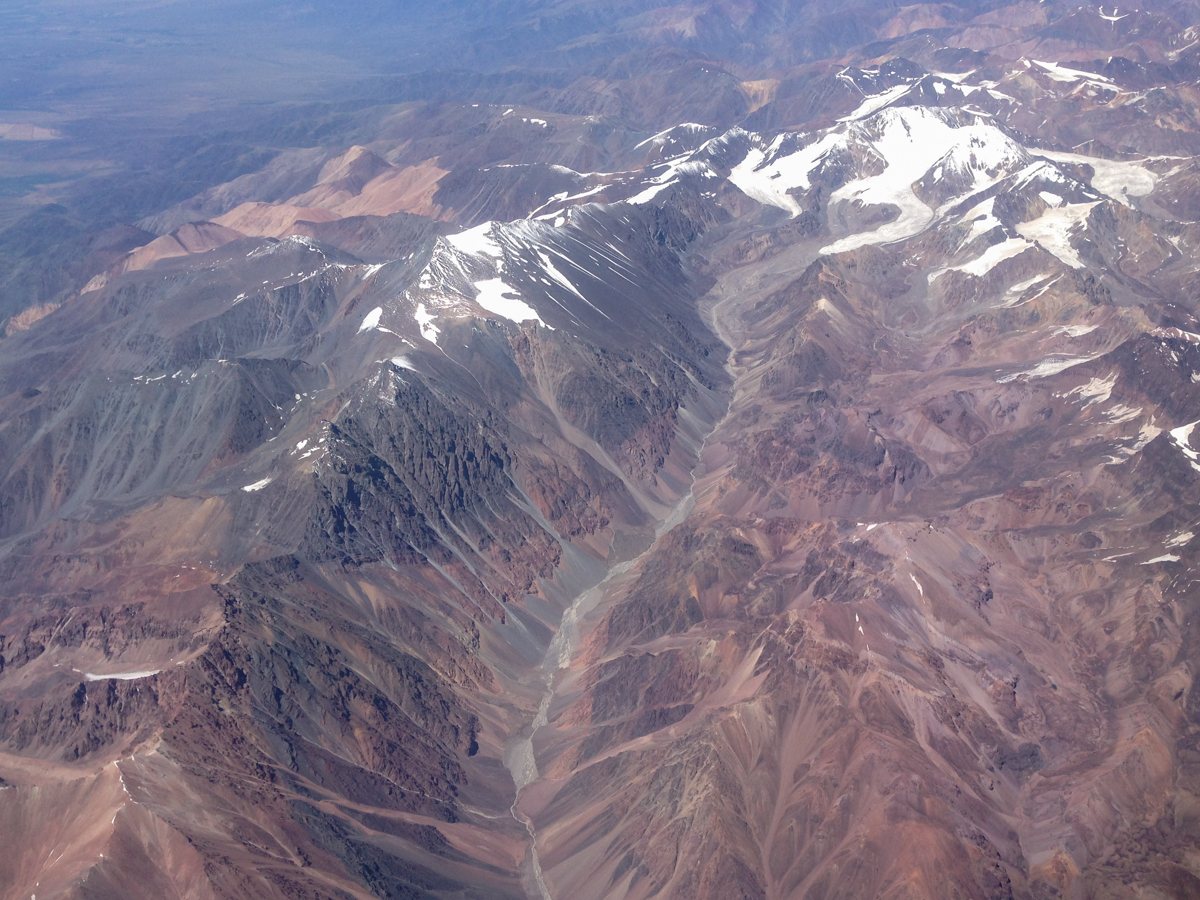 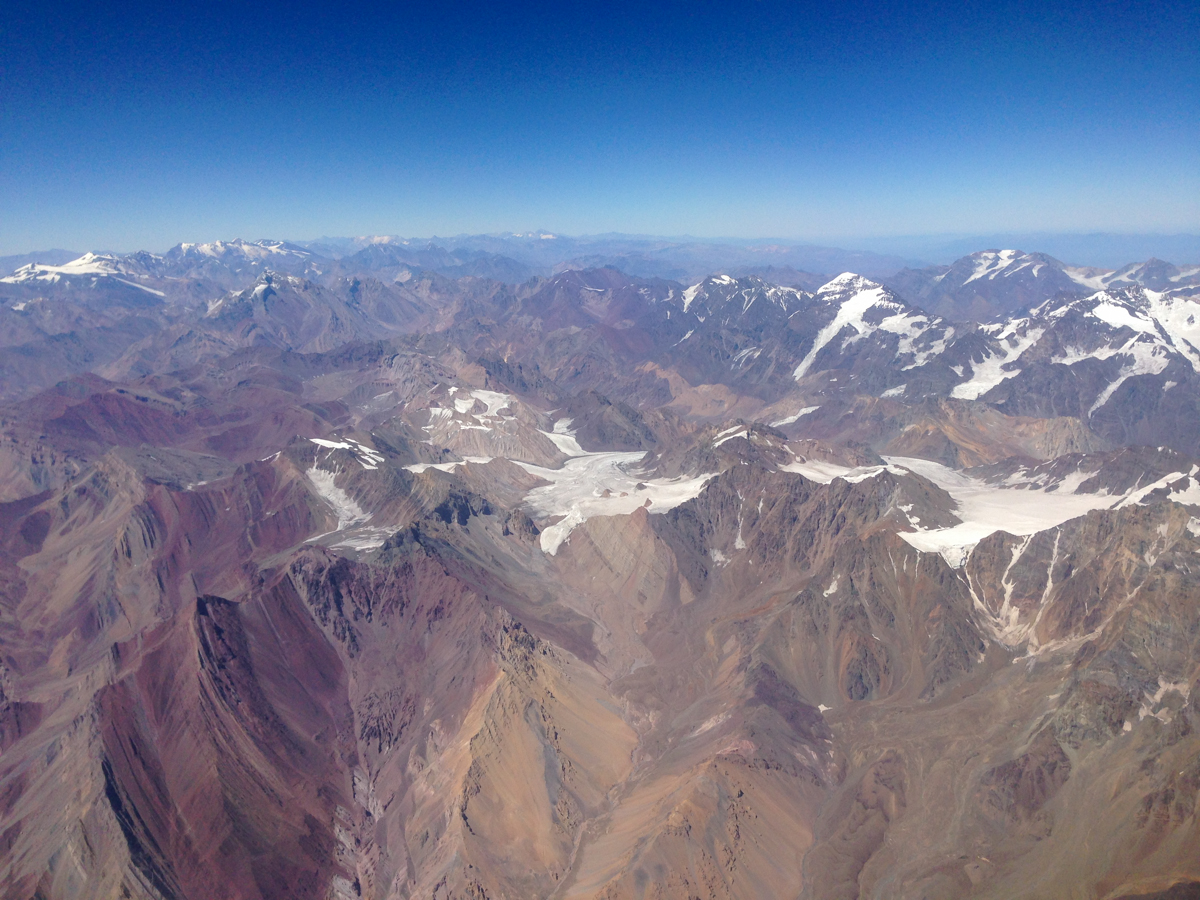 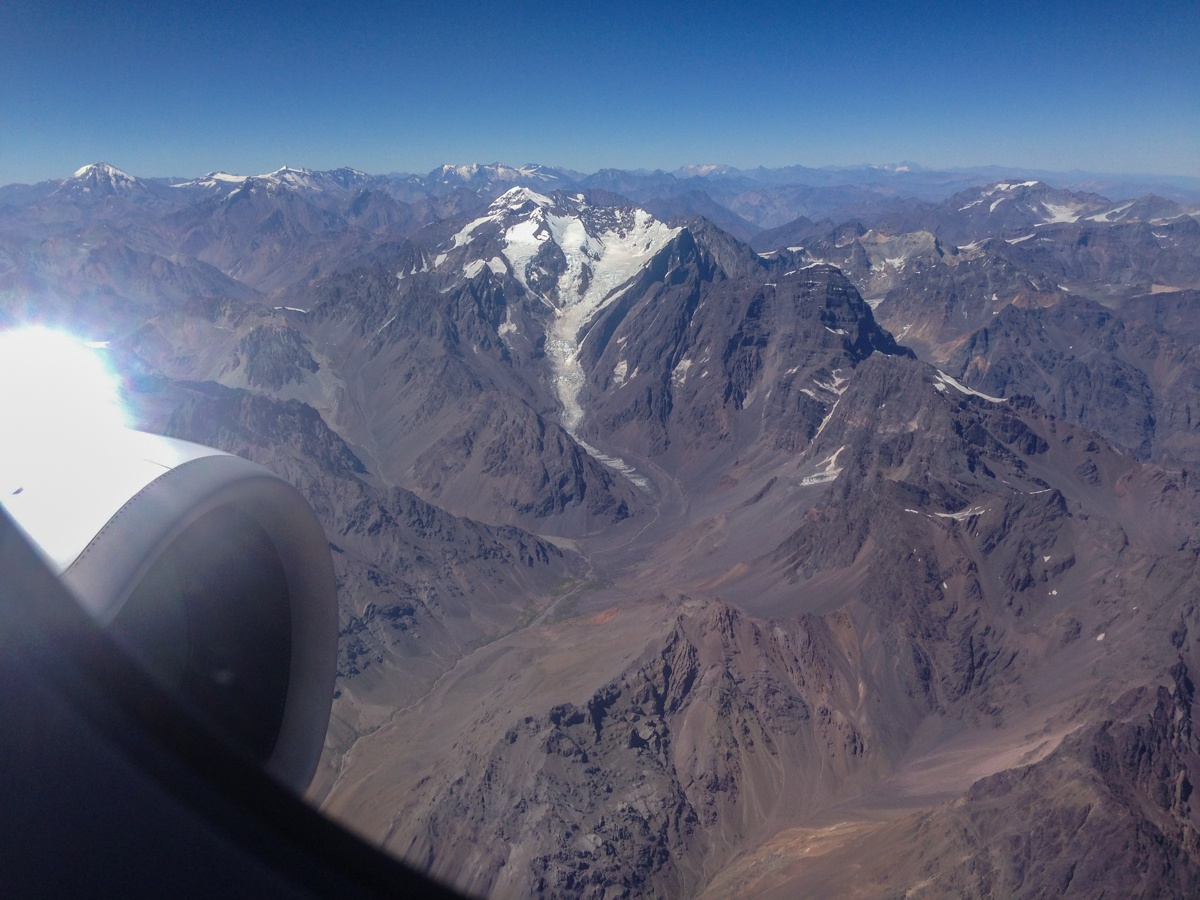 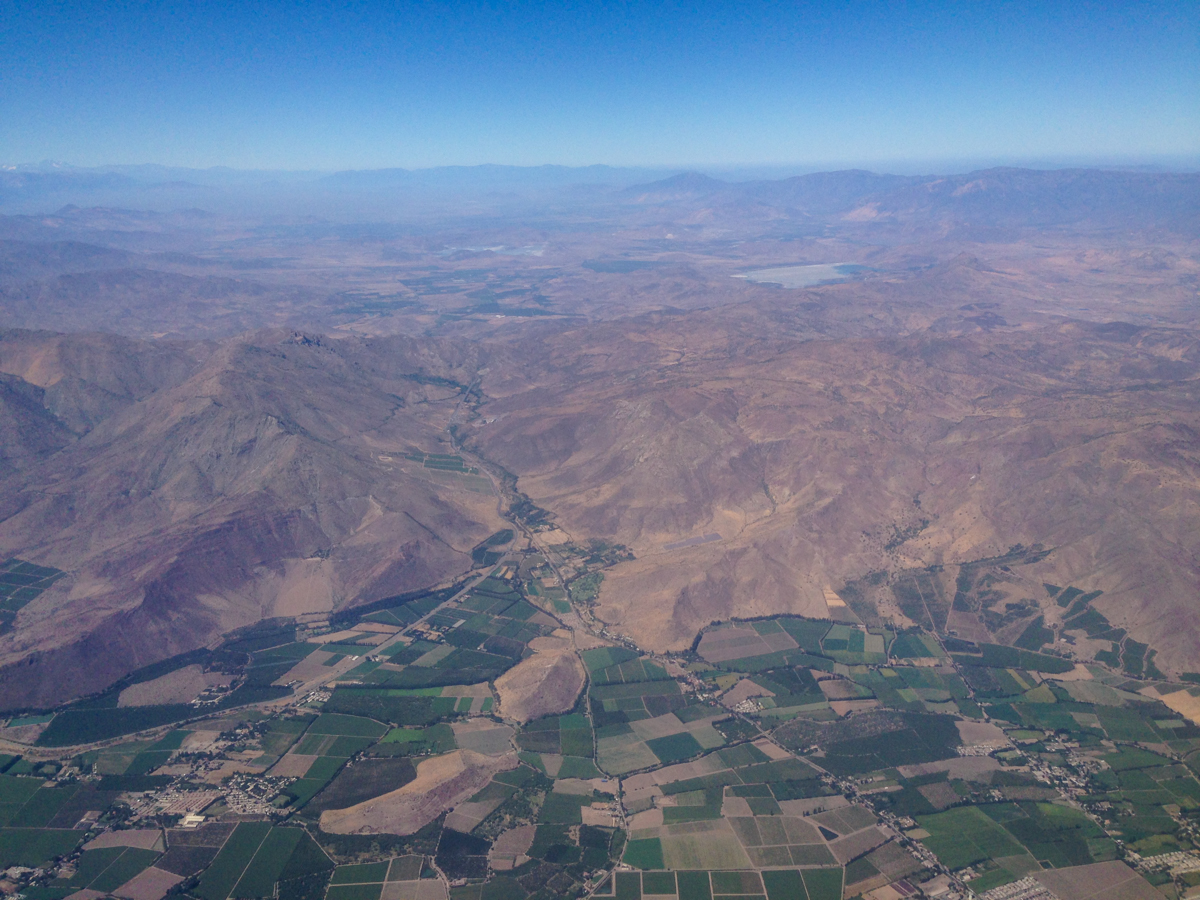 Santiago was a bit of a slog as I had to clear immigration and customs, the latter meaning that I had to collect my bag, have it x-rayed and then check it back and go through security. Yet again. On the positive side, despite my expectations I was pleased to be reunited with my bag and know that we’d managed to travel together thus far. We’ve been separated on far simpler trips than this one!

By this time I was running out of energy and enthusiasm for travelling. I tried to get some Chilean pesos out of the ATM but was put off by the $5000 (those are pesos, not dollars!) charge and decided to wait until Punta Arenas in the hope of paying less. I asked at a cafe if they would fill my water bottle and due to the language barrier ended up with boiling water! I was harangued by one of the staff to pay a tip for the privilege, but couldn’t communicate that I literally didn’t have a single peso. She wandered off in disgust before I could open up my wallet and prove it to her. Fortunately the lady who served me was far less demanding!

Finally, the last leg of the journey. I shared my row of seats with a mum and toddler, and I’d be hard pressed to say who was the most fidgety by this stage, me or the toddler! Still, I managed to keep myself occupied with admiring the views, and the excitement of spotting some volcanoes cheered me up immensely. Cute toddler spent some time playing with her plastic farm animals and we bonded over animal noises and pictures of my cats which I showed her on the iPad, prompting many a Spanish miaow. A sighting of the Torres del Paine, my destination for the next few days kept me going until the end, but I was very glad to exit that final flight, and pretty hungry as the only food on offer was for sale. 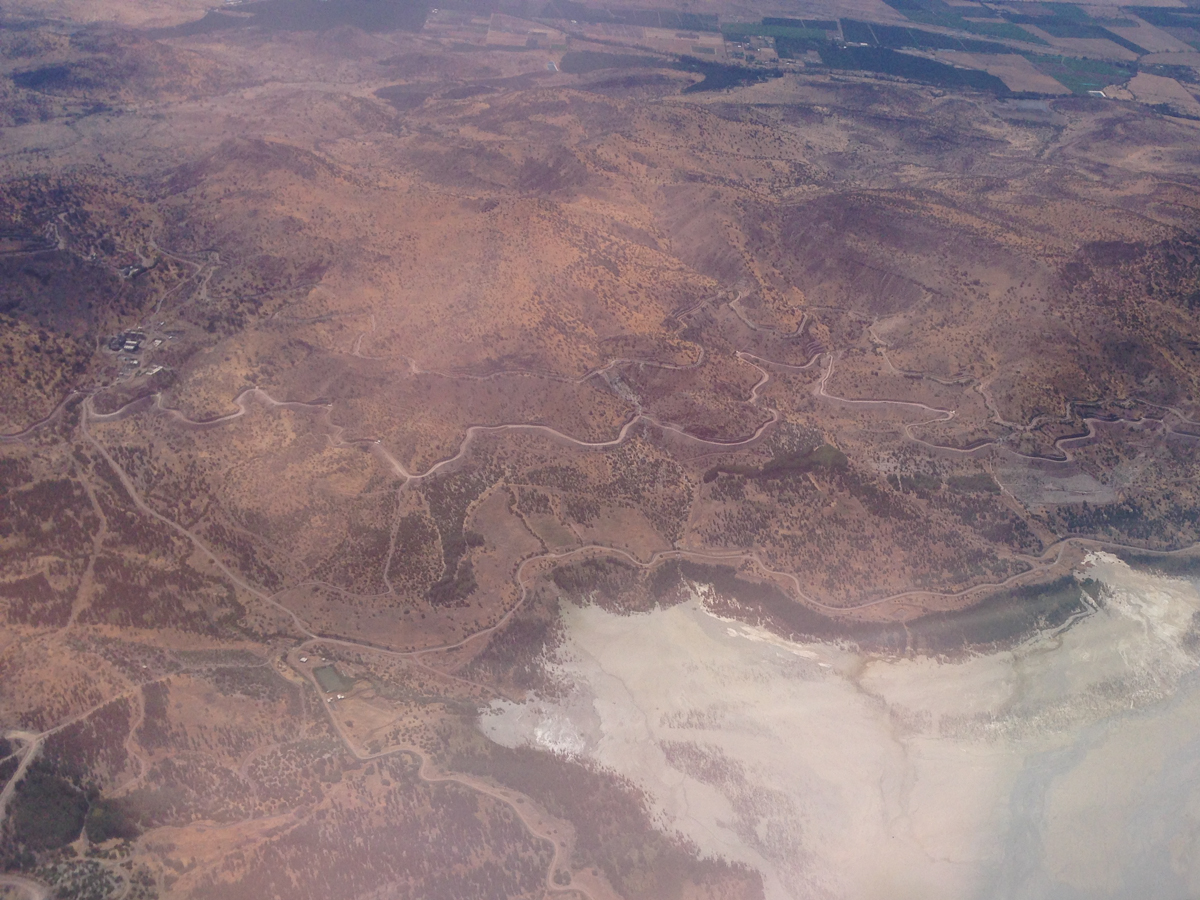 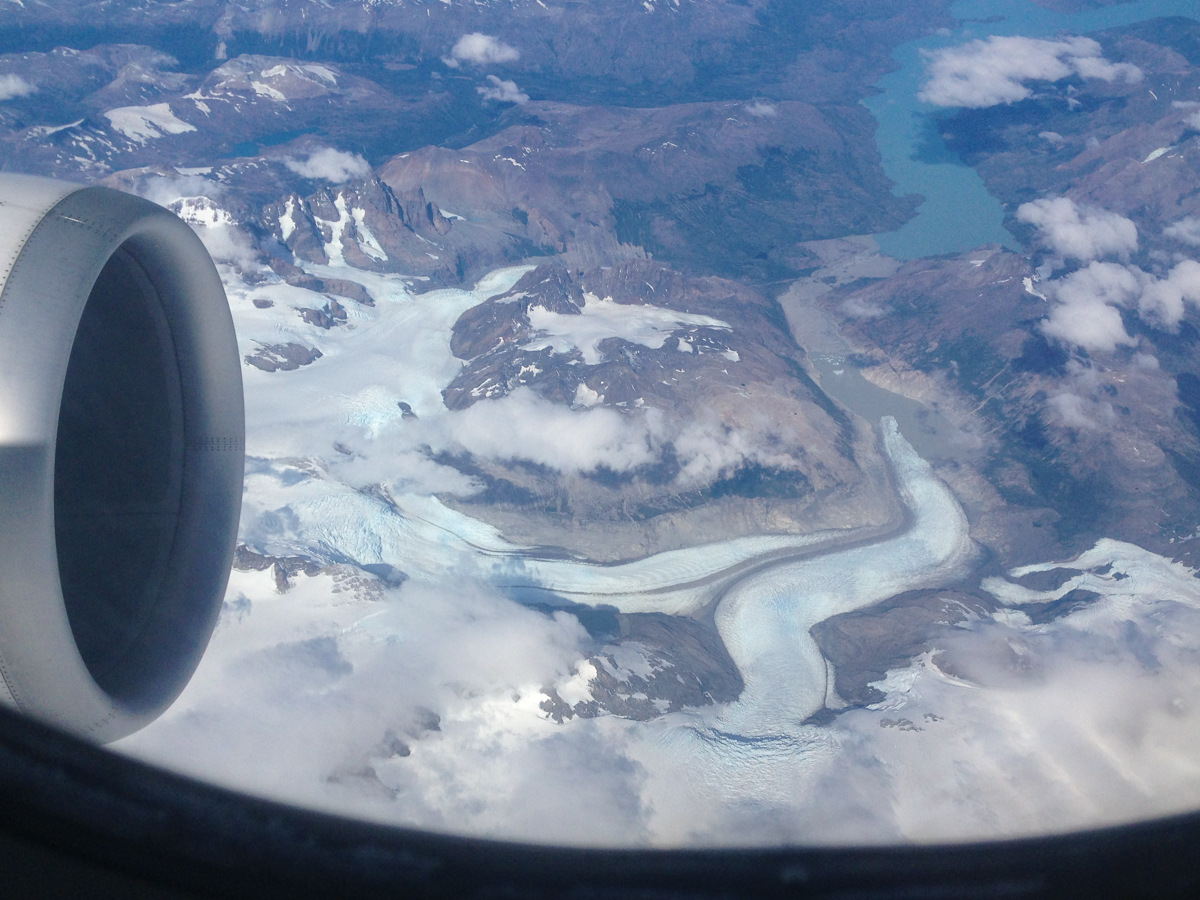 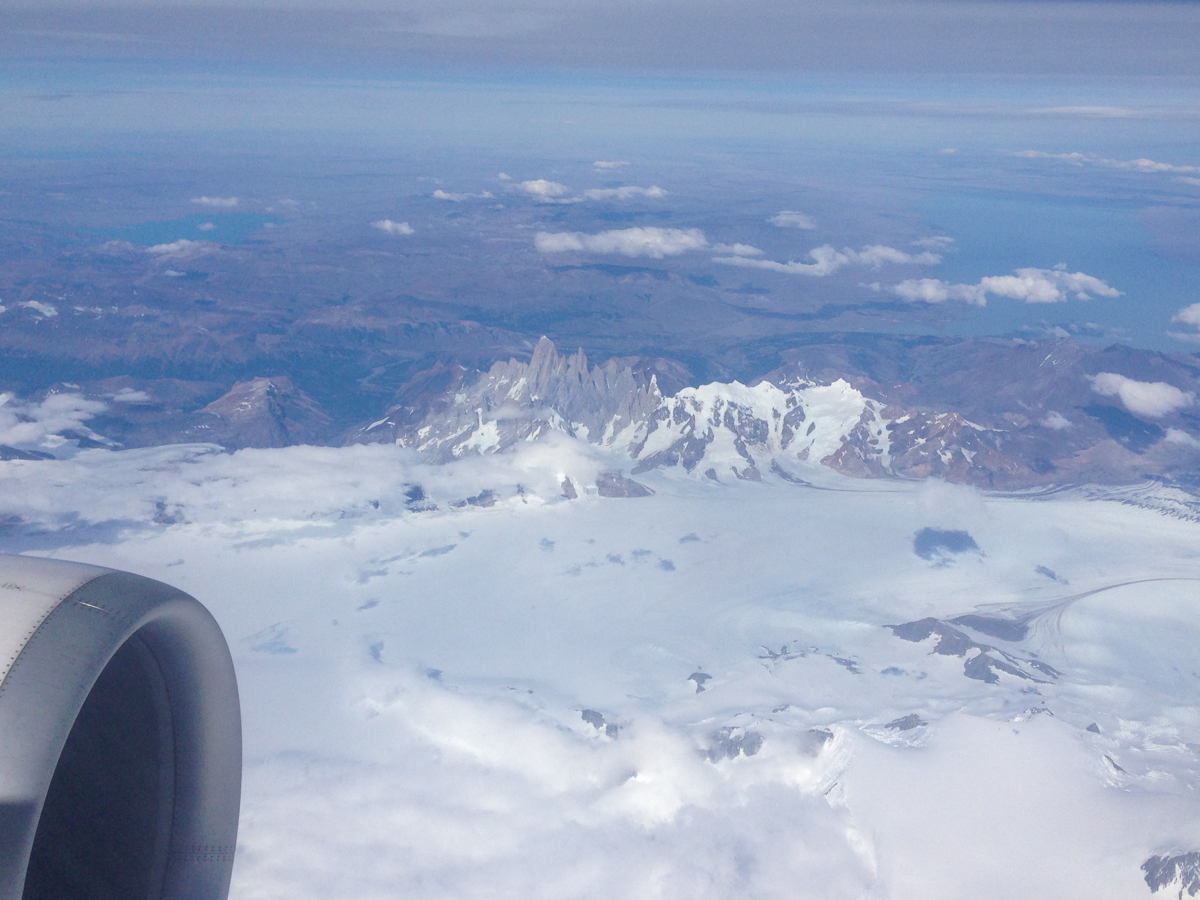 With little difficulty I managed to attach myself to a group of people who wanted to travel into the city centre in one of the minibuses that will you drop you at your hostel door. This despite having to make a hasty detour to the cash machine, where I was sadly charged $6000. Should have gone with the first offer!

Bug eyed but hungry I wandered into town for a quick meal before heading back to the hostel. Plenty of dogs to be seen on the streets, all of whom seem to be very chilled and very friendly, both with each other and passers by. My hostel was friendly, and the owner and I managed to communicate reasonably well despite our lack of common language. I had a cheery green room right next to the bathroom, which was convenient, and the communal area and dining room, which was somewhat less convenient due to the noise, although I was tired enough that it didn’t stop me falling asleep within minutes.