Already a week has passed on the Falkland Islands and when Friday came around it was time for my first excursion, to The Rookery on Saunders Island. Flights between the islands are operated by FIGAS (Falkland Islands Government Air Service) and run somewhat akin to a taxi service. Flight requests have to be in the day before travel, and only then can the schedules be made. Therefore, whilst I knew that I would be travelling on Friday, I didn’t know until I got home from the hospital on Thursday evening at what time I’d have to be up at Stanley airport. As it turned, my check in time was 10.55, which meant that I had plenty of time to attend the ward round and see a patient in A&E before going up to the airport.

I stocked up with food, as my accommodation was self-catering, but I sorely missed my sunglasses, suncream and waterproofs (not that I really ended up needing the latter) all of which are in my case, which is hopefully going to arrive sometime today. When I arrived at the airport, which is about a 10 minute drive from town, I was asked first to put my bags onto the scales and then to get on them myself. I was then given sticky destination labels to tag my bags with before handing them over to be placed with the rest of the luggage for my flight, including a cat box full of pullets and a stack of eggs. When the inbound flight came in, amongst the passengers were a couple of puppies who were going to new homes. As you can see from the freight charges shown below, this is nothing unusual. 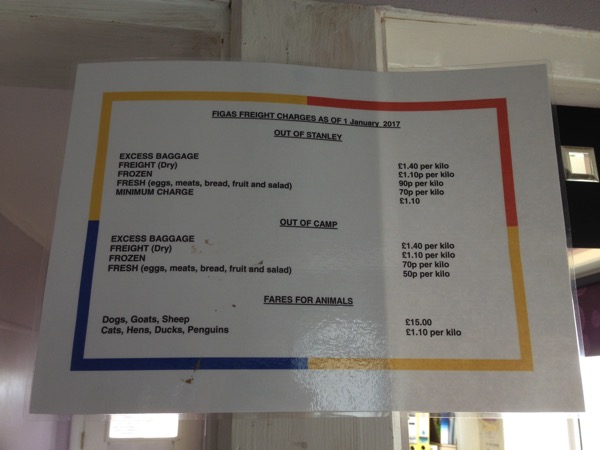 There are 5 FIGAS planes, and they can each take 7 passengers. My flight was stopping at Pebble Island before going on to Saunders Island to drop me off, with two more stops after mine before heading back to Stanley. The passengers were a mix of locals, including some teenagers returning home from school, and tourists. It was a lovely sunny day, so we had some good views along the way. When we got to Pebble Island I was amazed, and thrilled, to see that instead of a runway we were landing on a grass airstrip. I’ve flown in smaller planes, but I’ve never landed on an airstrip before! The ‘airport’ on Pebble is a small shed with fire fighting equipment, and the locals were ready and waiting in a landrover, hooked up to the hose, in case of emergency. As I found out when I got to Saunders Island, the flights have to be met by two people, who get the windsock up before the plane comes in, and radio through the weather conditions to the pilot and are ready for any emergency situations. Having dropped off our first passenger we were up in the air again very quickly and it was only another 10 minutes before we were coming in to land on Saunders. I was met by the farmers at Saunders Island Settlement, home to 6 people in the summer and 4 in the winter, who also run two houses that they rent out to visitors. Once we’d seen the plane safely out, we headed up to the Rookery, where I was going to be staying for the next two nights. I was pleased to find out that I was going to be on my own at the Rookery for the first night, although I would be joined by someone else on Saturday. 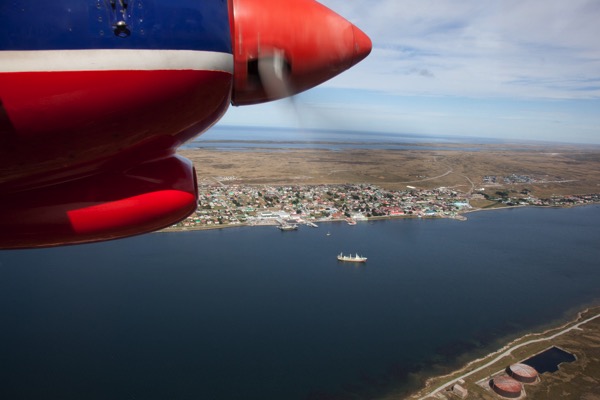 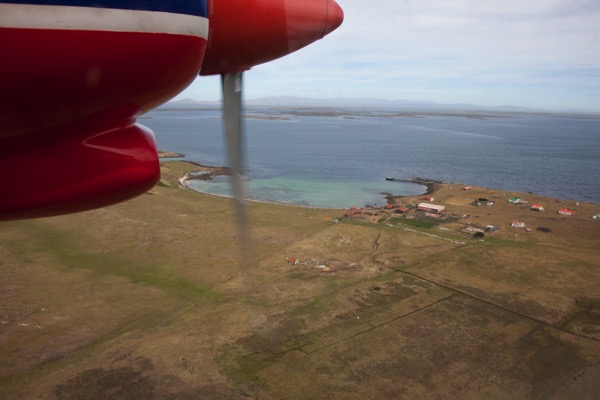 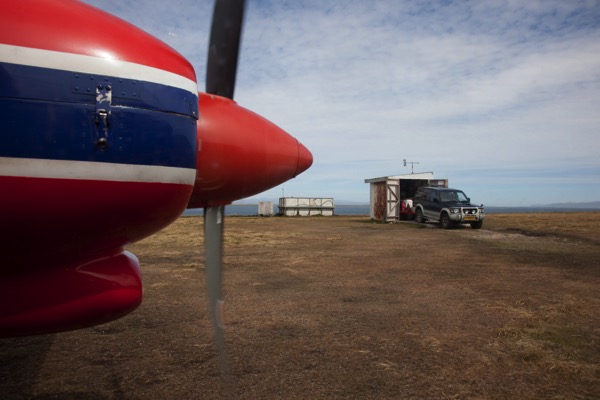 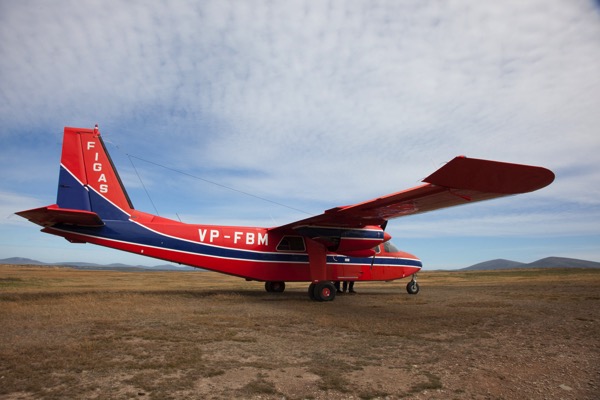 The drive up to the Rookery takes about half an hour on off-road tracks. Along the way there were plenty of sheep (the settlement is primarily a wool farm) and geese, and before we made the climb uphill to the Rookery, some Magellanic penguins. Having taken 10 minutes to settle and get a drink, I headed straight out to find wildlife. There are Black Browed Albatrosses colonies all along the cliffs, the first being only 5 minutes walk away from the house, and a further 15 minutes brings you to King Cormorant and Rockhopper penguin colonies. Alternately, heading downhill and east from the house there is a beach with both Gentoo and Magellanic penguins. All these birds, and all to myself! 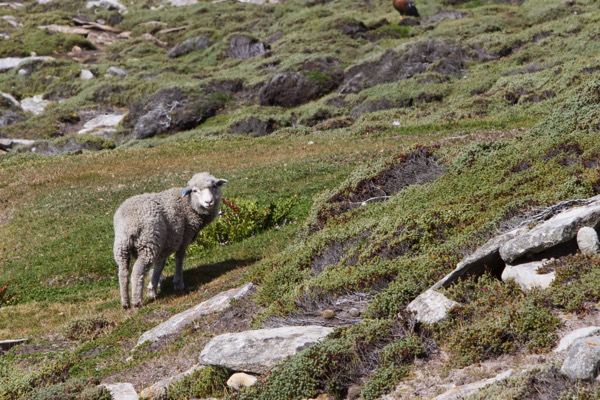 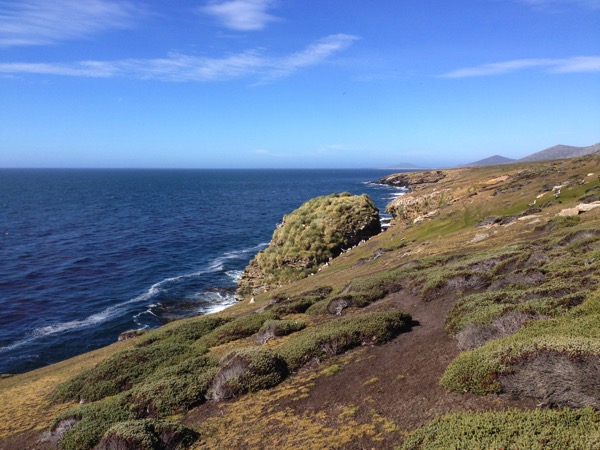 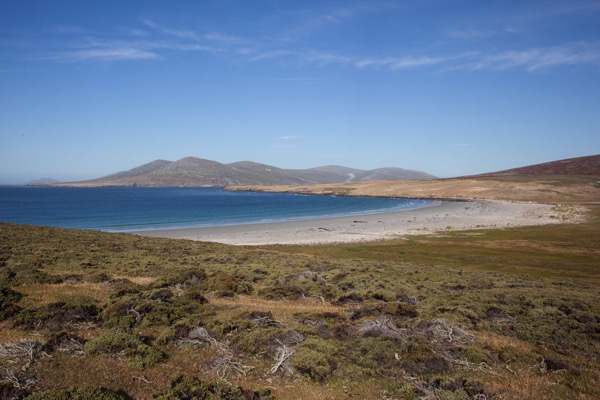 I ended up spending most of the weekend up on the cliffs with the albatrosses, cormorants and rockhoppers. I did go down to the beach on Friday evening but I found that the gentoos and magellanics were quite shy and inclined to rush off in the opposite direction when I was still quite far off. The other person never did turn up so I had the place all to myself the whole weekend, which was just fantastic. In addition to the main stars, there were quite a few other birds including songbirds, skuas, turkey vultures and dolphin gulls. 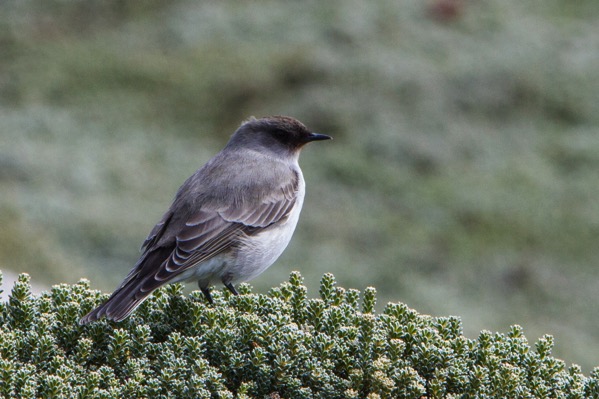 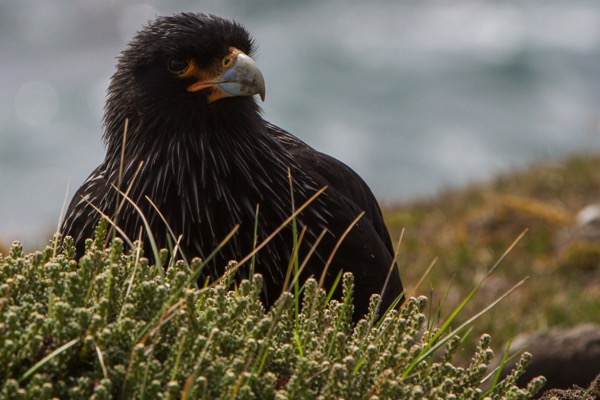 Thrush – need to check which type 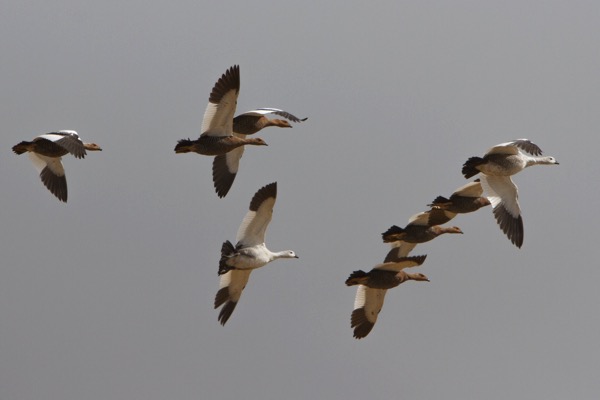 Geese – need to check which type, there were lots of them on Saunders 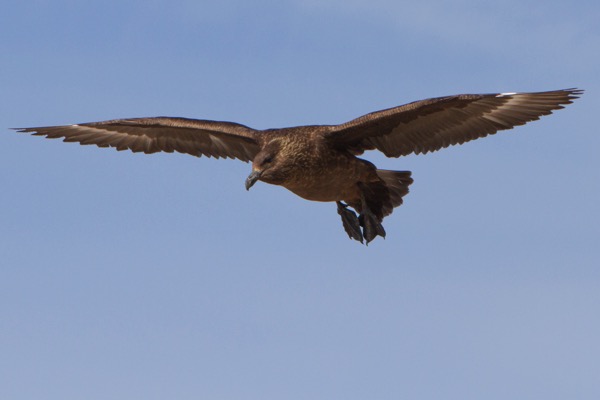 Skua – these are hanging around trying to steal food from the chicks. I saw them attacking a king penguin when I was in South Georgia 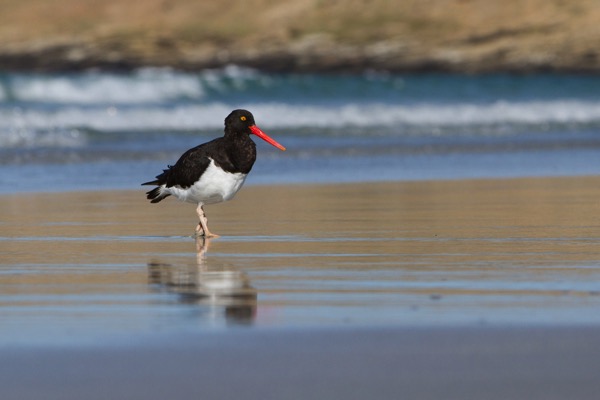 I’ve taken so many photos this weekend, even when filtered down, that I’ve split them into individual posts for the albatrosses, cormorants and penguins. Some of the photos don’t seem to be exporting as sharply from Lightroom as I would expect. I’m not sure why, but if anyone has any tips I’d be glad to hear them. I am working with a rather old version (4), but even so…

As ever the weekend was over far too quickly, but I had the good luck to be the only person on the flight back to Stanley, so I was able to sit in the front seat and listen in to the radio communications. Having woken up to fog, it has cleared during the day and by the time I was back at Kay’s it was hot and sunny. Finally, at about 5pm there was a knock on the door and I was gratefully reunited with my suitcase, which had made it down on the (one day delayed) flight from Punta Arenas. It was with great relief that I changed out of my long sleeved shirt and into a t-shirt for the first time in a week. I’ve been sweltering!