One of the highlights of coming out to the Falkland Islands for my elective was always going to be accompanying the doctor(s) on a visit out to camp (i.e. outside of Stanley). Camp visits take place each Tuesday with a different group of settlements being visited each week on a 6 week rotation. I had hoped to go out to Fox Bay a couple weeks ago, but there was no room for me on the plane, and last week’s visits didn’t take place so I was excited to get an email last Friday asking me if I wanted to go out on this week’s visit which would include Hill Cove (which is on West Falkland) and Carcass Island. As I set off for Bleaker Island soon afterward replying to the email there wasn’t time to think further about the visit, but as I was lying in bed on Sunday night I couldn’t help but think it was a shame to go out and not spend any time at Carcass, so when I had a break after the ward round on Monday morning I called up FIGAS (the air service) and asked if it would be possible for me to stay overnight and return a day later than planned. They hadn’t yet scheduled the flights so I had half an hour to call up the settlement and see if I could arrange accommodation before confirming my plans. Unfortunately for me Carcass were fully booked for the night as they’d had some guests who needed to return from one of the outlying islands a night earlier than planned due to the strong winds forecast, but when I asked if I could bring a tent and camp out they kindly agreed, even though they don’t usually allow camping, and said I could have full use of their facilities and that they’d feed me as well.

It ended up being an early start as I wanted to send some emails before we left the hospital for the airport at 7.40am. We took off at around 8.30am and had a stop at Saunders Island before making the short hop over to Hill Cove where we were picked up and driven to one of the settlement houses to see our patients. The plane waited for us whilst we had our consultations and the pilot was dropped off to feed some very cute lambs whilst he was waiting!

As is the custom here we all divested ourselves of our shoes before entering the house and so I had one of the most unusual consultations I’ve yet experienced – two doctors, a medical student and a patient, gathered in a bedroom, all of us in our stocking feet. Of course, this suited me perfectly, with my love of walking around everywhere in my socks! The owners of the house were also the guardians of the settlement’s ‘camp chest’, a cardboard box containing a supply of medications such as antibiotics, steroids and strong analgesics in case anyone is acutely unwell. In this case, having spoken to the patient over the phone the doctor will call the camp chest holder and ask them to issue the appropriate medications to the patient.

Having completed our mini surgery at Hill Cove we returned to the plane and set off again to Carcass Island. This was to be a ‘strip visit’, meaning that our patients would come out to the airstrip to see the doctors. The consultation doesn’t quite take place on the airstrip itself, but rather in the land rovers that are there to meet the plane. I had the interesting experience of trying to measure someone’s blood pressure whilst the plane was taking off again and another land rover was idling next to us! I also had to keep guard of the doctors’ bag to make sure that nothing blew away, and more importantly, that the caracaras (also known as Johnny Rooks) didn’t steal anything from it. They’re very inquisitive birds and real hooligans. 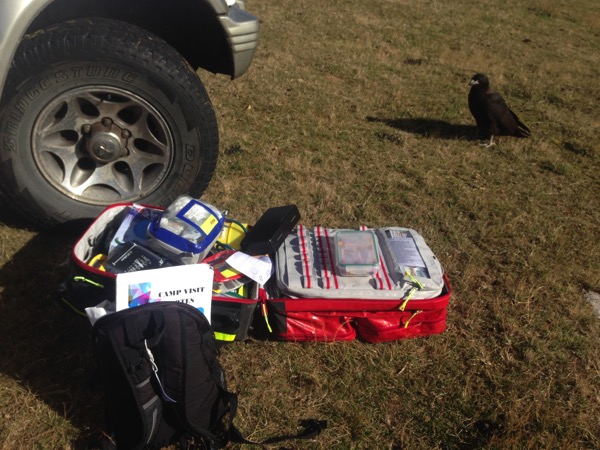 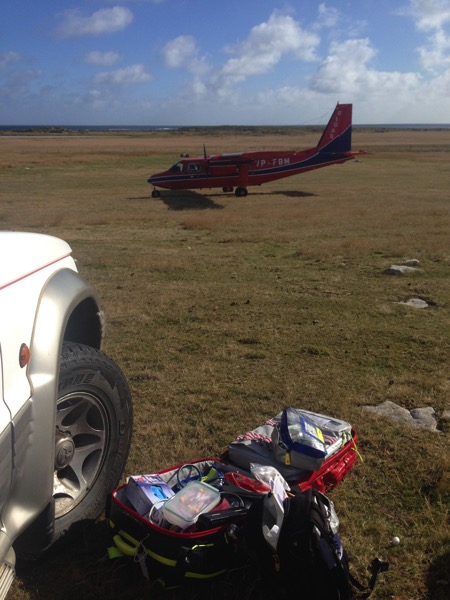 Whilst we were busy seeing our patients the plane made a short visit to Westpoint Island to drop off another passenger before returning to pick up the two doctors and take them back to Stanley. It was about 11.30am by then and I was delighted in my decision to stay on the island, especially as I had most of the day yet ahead of me. Having had pouring rain overnight and flown through quite a bit of rain and cloud on the way to Carcass, the weather had now improved and it was a lovely sunny afternoon, just perfect for hiking and bird watching.