Sitting with a camera watching the bears feels like a very timeless activity, and being out of contact with the world, we had no reason to care what day it was. As a result, it seemed to come as a bit of a shock that our time with the bears was almost over, and that today’s trip to shore would be our last.

Life in Alaska is far more driven by the weather and practicalities than we’re accustomed, and our final choice of bay was therefore more a decision based on the requirements of the flights (out, for us, and in for the BBC) than anything else. That said, we’d had a good time at Kuliak on our first visit, so we weren’t unhappy.

Our last morning dawned bright and sunny, and after a quick breakfast we donned our waders for the last time, and headed to shore. As the first group out, we set up position at the waterfall, with our guide Steve. We had a long wait. There were few salmon to be seen, and no bears. We waited an hour or so, and with no sign of action we were just picking up our cameras and beginning to move to a new spot when we were ushered back quickly.

I sat down just in time to see a bear approaching and began to shoot. It wasn’t long before we realised that this was the same mother bear we’d seen earlier in the week. Apparently she sometimes caches her cubs in a safe place and comes down to fish alone. She didn’t stay all that long before wandering back, but as another bear had turned up in the meantime, we hung around. 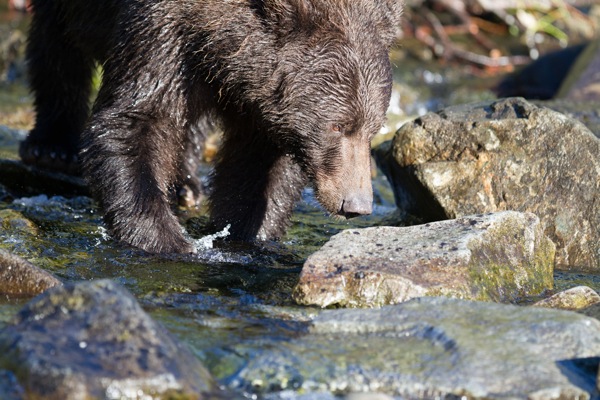 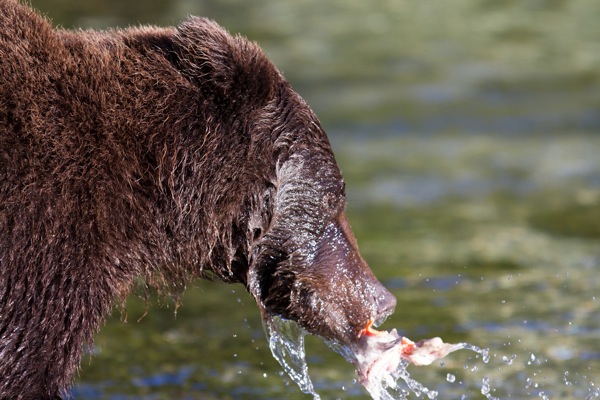 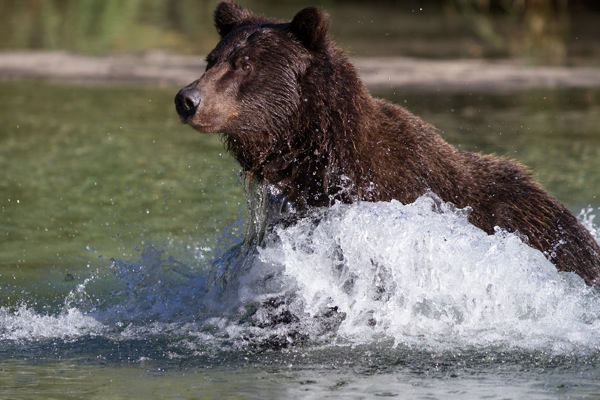 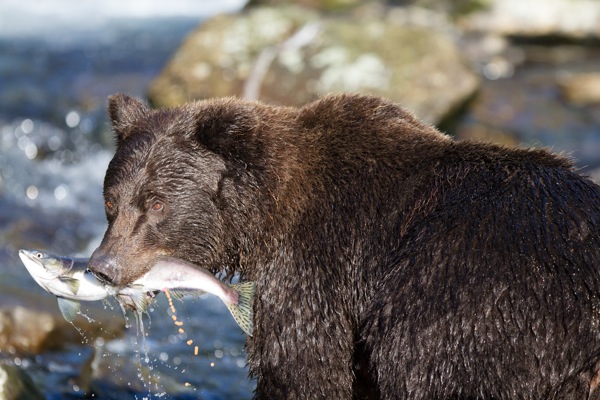 Our patience was soon rewarded, as the mother returned with her two cubs, which bounded past us, one getting a little skittish and coming within about a metre of my feet! Obviously there was no way we were going to move positions now, we just sat tight and enjoyed our final show. 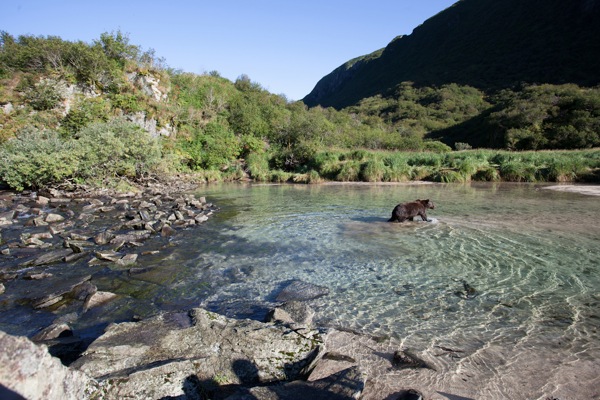 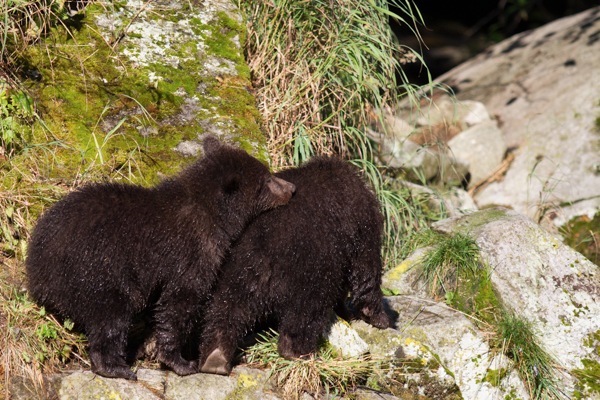 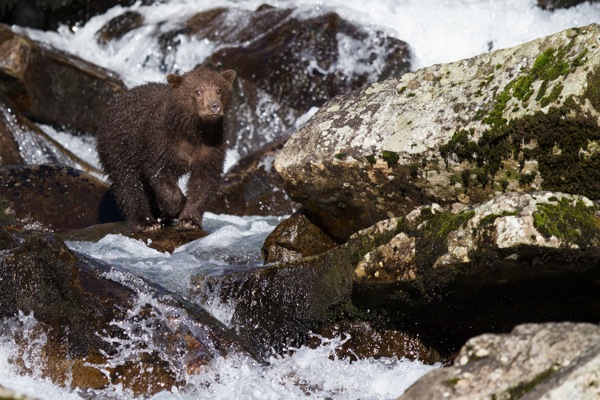 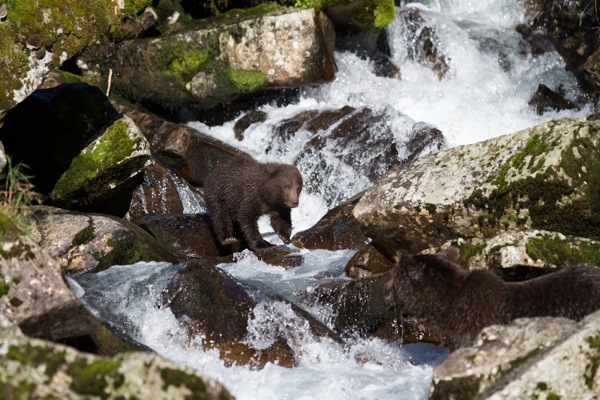 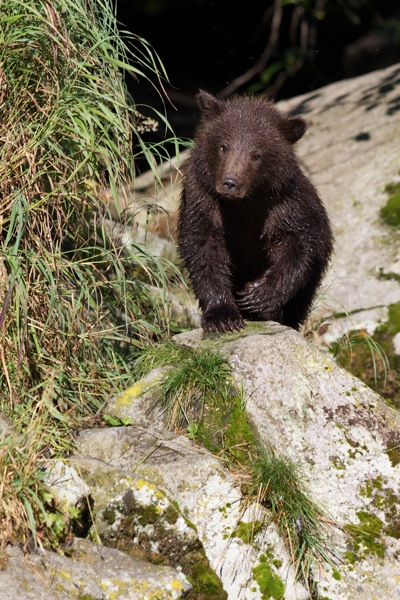 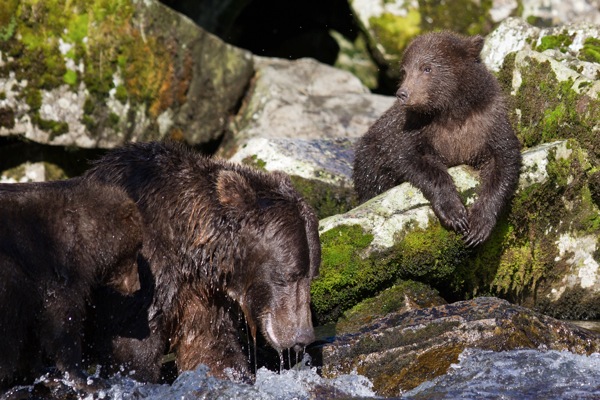 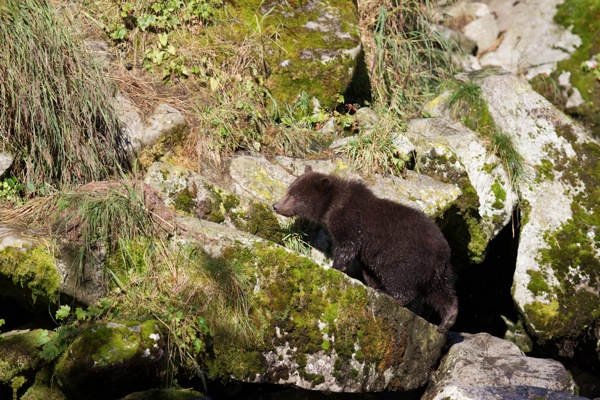 Eventually the group moved on, vanishing beyond the top of the waterfall, and so we moved spot to the other side of the river giving the other group a turn at the waterfall. I lay down on the grass, hoping for some shots from a low vantage point. Unfortunately, things went quiet again, so all that really happened was that I got damp and cold, especially as the sun wasn’t shining on our little spot. 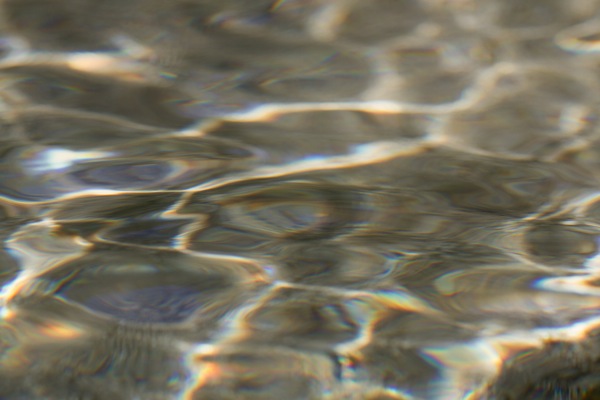 Finally, around the time we needed to think about heading back to the boat, things started to heat up, so we took a back route along some bear paths, and finally across the river, to watch a bear fishing in front of us. The bear put on quite a show, but unfortunately, we were facing straight into the sun, so the resulting photographs aren’t much too look at. 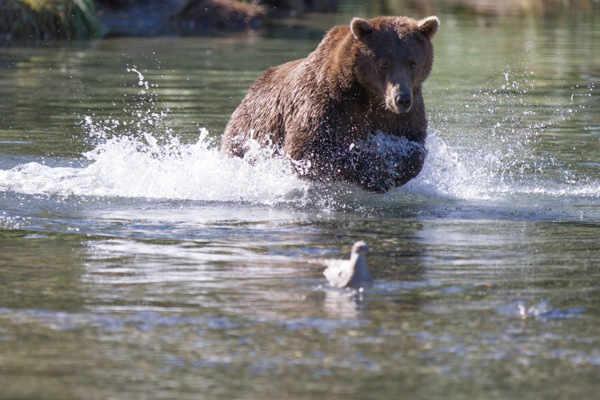 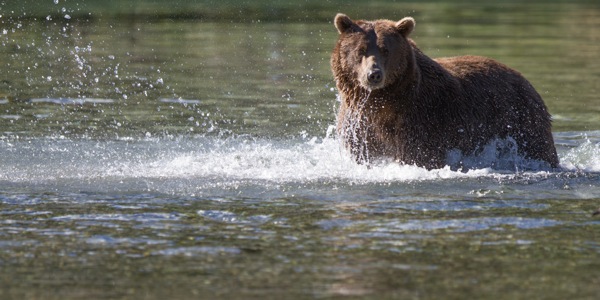 And then, that was that. Time to rush back to the boat, grab a bite to eat. Time to throw our clothes, camera gear and laptops into our cases. Time to take the skiff out to the float plane. Time to leave. 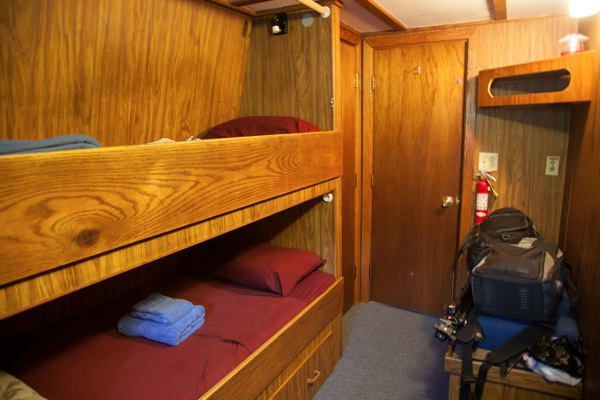 As the first group out at the start of the week, we were also first to leave. I must admit that I’d been entertaining hopes of bad weather in Kodiak grounding the planes again, but no such luck. 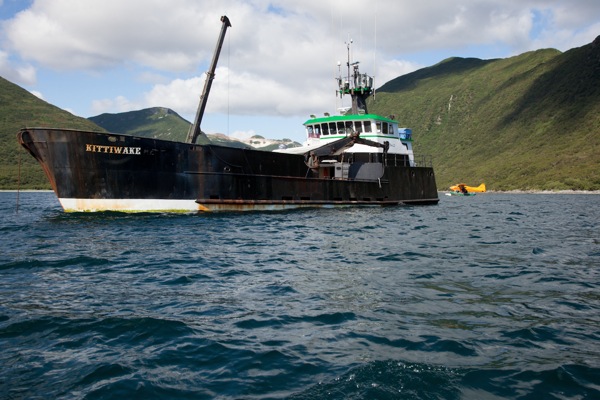 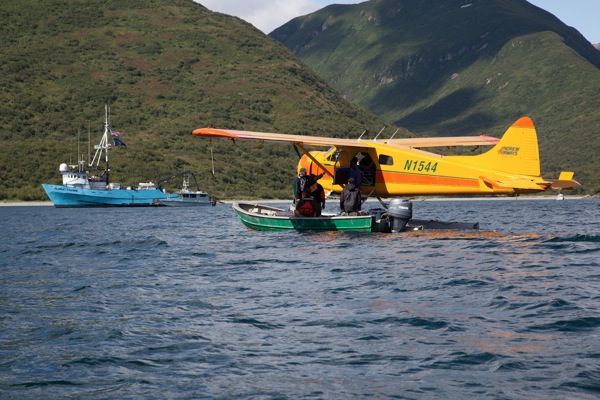 The weather was clearer than our first ride out so we had great views from the plane. It was pretty tough though to be leaving such a magical place behind us and return to the hustle and bustle of everyday life. Arriving back in Kodiak and setting ourselves up in the stuffy hotel room, filled with the artificial scent of cleaning fluid, I found myself longing for the fresh air and hint of dead fish aroma of Katmai. 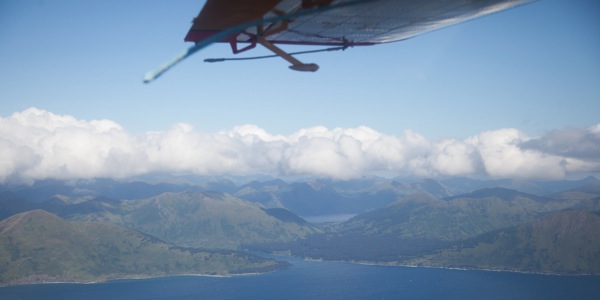 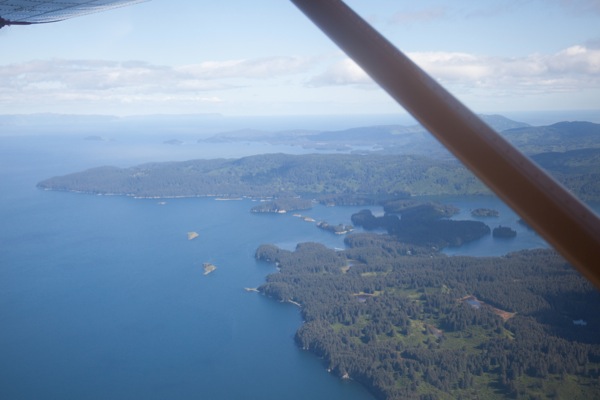 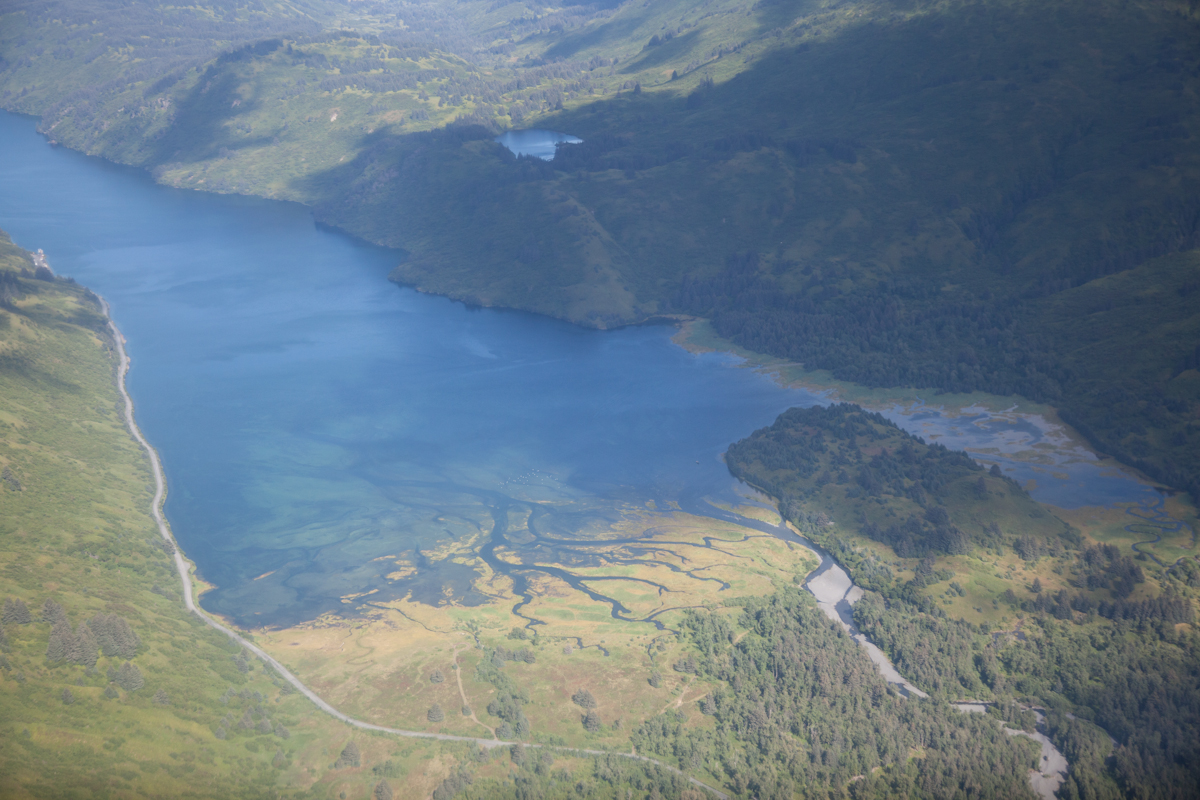 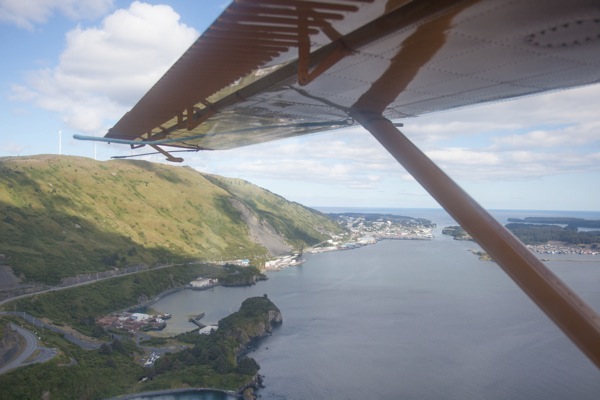